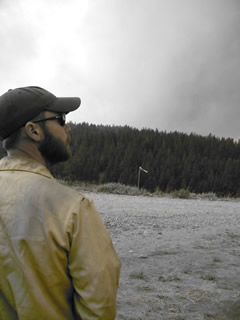 Supt. Matt Prentiss of the Wyoming Hotshots joined the crew as a squad boss in 2003, and worked his way up to the superintendent position shortly there after. Going into his eighth season with Wyoming IHC (14 in total), he couldn’t be happier. With the season fast approaching, he took a few minutes to talk with Hotshot Fitness about gut-busting 72 hour initial attack assignments, close calls on the fireline, and what it takes to land a job on his crew.
HF: How’d you get into fire?
MP: Well, out of high school I wasn’t really doing much (laughs) and my dad pointed me towards the California Conservation Corps. I was a complete city kid, didn’t know anything about wildland fire, and I got into that program, and they said hey, “Wanna try wildland firefighting”. I said “Hey sure!” So I started on a handcrew out of Placer that ran local fires. It was basically a mop-up crew, but we helped out with larger fires. Most importantly, I was able to get my foot in the door. Then I got on a Type III engine on the Eldorado National Forest, and worked with them for two seasons. Then I went and shotted for a year with Eldorado IHC. That’s basically how I got started.
HF: Could you describe your crew’s PT program?
MP: We focus mainly on circuit training and hiking. We throw running in there, but we try to focus mainly on things that are relevant to our job. Running used to be a big part of the program but we’ve scaled back on it because it’s not what we do. Hiking is what we do. Circuit training has the cardio, but it also incorporates upper body and core workouts.
HF: Could you give me some examples of your circuit training exercises?
MP: We’ll stretch first, do a short jog, maybe a mile and half run, to get everyone warmed up, then we’ll come back and do the circuit. We usually set up 10 or 12 stations, and go for 45 seconds, then take a 30 second rest. We’ll pair up people, so one person will do the exercises while the other one rests. Usually, we’ll do situps, jumpsquats, curls, boxes (step-ups), wall-sits, push-ups, as well as a mixture of plyometric training and some other strength training exercises. On average, we’ll do 2 or 3 circuits per session. 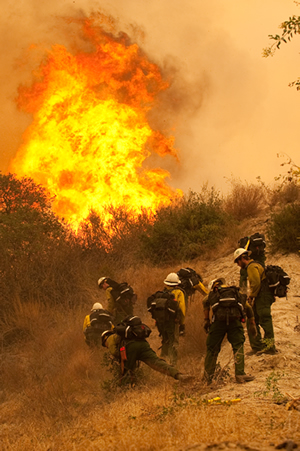 HF: Tell us a little bit about your training hikes. What are they like?
MP: We have two different types. The first hike is “The RollerCoasters.” Since we’re out here in the desert where it’s relatively flat, we take advantage of the rolling hills and mesas that surround the station. We’ll start by doing a quick hike to the top, come back down, turn around, do a quick hike back up. We’ll usually do that for an hour. It’s a mental strain on the crew because they don’t know when I’m going to stop them. Also, the ascending and descending works different muscles, and mimics what we do on the job.

Our second hike is a long hike, and takes about two and a half hours to complete. It’s just a long, grueling hike, through all terrain types.
HF: Do you guys have a name for that hike?
MP: Yeah, we call it “The Beef Trail”. This being Wyoming, they used to use this trail to bring cattle off the mountain onto the ranch. It’s pretty gnarly.
HF: How do you advise prospective crew members to train in the off-season?
MP: That’s a hard one. Just because, until you do it, you can never really know what it’s like. I suggest a lot of hiking with weight. Mix it up, go on long hikes, hit the hills, then obviously run as well, but don’t let that be your main focus. Also, be sure to add some upper body and core workouts. You gotta be able to swing a tool all day. It’s just tough to convey that to people. I get guys all the time who tell me about their PT program, and what great shape they’re in, and they show up and they’re really excellent runners but then you get’em on a hike with weight on their back and they struggle.  Focus on hiking with weight, then do a lot of pull-ups, push-ups, sit-ups and exercises like those.
HF: Would you recommend that sawyers or scrape do any sort of specialized training based on what they’re going to be doing?
MP: Definitely for sawyers, it’s the weight. Most sawyers are in awesome shape, and they can pack the weight, but definitely being able to have the upper body strength and the cardio to run the saw all day, that’s the key.[HF: a standard issue chainsaw with a 28″ bar, and a full tank of gas, can weigh 20-25lbs] For scrape, it’s the same thing, it’s all that upper body strength that you need to swing a tool all day.
HF: When you’re looking for prospective crew member, what sort of skills, or background or attitude are you looking for?
MP: A really good attitude is a must. I look for someone that’s not going to complain about the little things. If you’re going to be a complainer, then you’re not going to have a fun season, and you’re going to bring everyone else down. That’s one of the main things that I look for: someone with a really good attitude. Basically, I’m screening for someone with a strong work ethic and a good attitude.
HF: Any advice you would give someone who was thinking about applying for a job with the Wyoming Hotshots?
MP: Constantly call us and email us to let us know who you are, and that you’re really interested. I get people all the time who email or call us once, and they get stuck in a folder, and hopefully they make my cert (HF: a cert is a list of all the people who have applied for the job online and meet the criteria defined by the crew’s needs). But then I have so many people on my cert that I can’t remember everyone’s name so the people that call me constantly and harass me, those are the people who are motivated and really want a job. 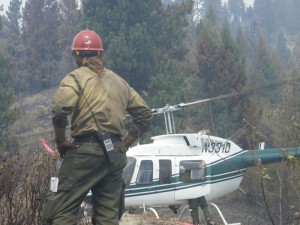 HF: Matt, you sound like you’re setting yourself up to be miserable, like you’re asking people to harass you!
MP: Yeah but I mean if you want a job that’s what you need to do. On some years I have over a hundred applicants so I have to sift through all those names, and the guy who’s emailed me or called me only once, I’m probably going to forget about him. But the guy who’s constantly harassing me, I’ll think “Oh there’s that kid who harassed me all winter long,” and I’ll take more time to figure out why this kid is taking all this time to harass me, and then I’ll look at him to see if he’s worth it. That just shows motivation. I also recommend prospective crewmembers check out our website – we have a lot of good info there about the crew and I try to update it as often as I can.
HF: What’s your biggest peeve about rookies?
MP: When someone comes to the crew with a bad attitude or did not come prepared physically for the season. It takes away from the rest of the crew because we have to devote time and energy on that person and raise them to the crew standard.
HF: 14 seasons – how many fires you think you been on in all those years?
MP: Oh man, (laughing) I have no idea. They all just blend together after awhile. I don’t know, over a thousand?
HF: What’s the longest shift you’ve ever pulled?
MP: 72 hours. I was on the LP (Los Padres National Forest) with the Eldorado Hotshots. It was a really busy season, and they were short on hotshot crews, and we were just burning and burning and burning. We rested when we could, but for the most part, we just burned that whole time. It was nuts.

HF: What’s the most brutal assignment you’ve ever had in your career?
MP: Probably the toughest assignment was last year on the Station Fire. Logistically it was a nightmare. It was very hard, and dealing with the urban interface, which out here we have some of that, but not to the scale that they have in Los Angeles. There were different agencies, with different ideas on tactics and what to do. It was at the end of our year and we were physically getting to that point where we just really tired from a long season. As a crewmember, all you have to do is just work, but as overhead you have a lot of other issues that you have to deal with. As a supervisor that was probably the toughest assignment I’ve ever had.

HF: What’s the scariest moment you’ve ever had on the fireline?
MP: It was the Jungle Fire in Montana. We were doing structure prep, and the fire was way out there, and then everything aligned perfectly and it just blew out of this canyon, and we held the crew back while the Supt and I ( I was an assistant at the time) went up to see if we could save some cabins that we had prepped earlier. They were right at the head of the fire. Earlier that day, I had put cat line (HF: cat line is fireline cut by a bulldozer) around the cabins, and put a safety zone in front of the house. As the fire advanced, the wind shifted, and started blowing right towards me, and I was up on top of this hill behind the house. I was up on the cat line trying to light my drip torch but the wind was so bad I couldn’t even get it lit. The fire was bearing down on me, and I starting run down the line, and I’m looking over my shoulder and fire is just curling over my back and I jumped into the safety zone just in time. So that was probably the scariest moment I’ve had. Trying to save a guy’s cabin and sticking around way too long.  I got a little bit of tunnel vision worrying about a structure and wanting to save it and ended up sticking my neck out a little too far.
HF: What do you love about this job? What keeps you coming back year after year?
MP: As a crewmember, you love the physical part, the challenge, and hanging out with the guys. That’s what I loved about being a crewmember. But now, I get excited about developing the next generation of future leaders. Seeing the expressions on a crewmembers’ face on a big burnout or after tying in a piece of line and being proud about it, those are the things that I get excited about now.

Striving to have an excellent hotshot crew and coming up with new ideas to motivate and push the guys, those are the things that make keep me coming back season after season.
HF: Think you’ll retire as a hotshot?
MP: I don’t know. I was on a run yesterday with my assistant, and I was like “Why the hell am I doing this?” This hurts way too much. (laughing) I don’t have any aspirations to go beyond this. I hit my career goal early, and I know I’ll be here for awhile. I always tell myself when I get to a base of a hill and I don’t want to hike up it anymore then I probably shouldn’t be a hotshot anymore.

HF: Well put. You sound like a damn good Supt, and we wish you and your crew a safe season in 2010. Thanks for taking the time, Matt!